The church of St Michael, Barton lies in open country outside the village of Tirril, just off the B5320 on the way to Pooley Bridge. It dates from the late 12th century and stands on what may be a pagan site. It is a Grade 1 listed building with an unusual squat central tower in the centre of a circular graveyard. Internally there is what may be a unique ‘double arch’ arrangement at the base of the tower.

The building has a long and varied history with connections to the Wordsworth and Washington families in its story and anyone interested in architectural history will be well rewarded. There is a recently published guide book available.

St Michael’s was originally the ‘mother’ church to a much larger parish that stretched all down the southern side of Ullswater and included the present parishes of Pooley Bridge, Martindale and Patterdale.

Services at St Michael’s are generally held on the second and fourth Sundays of the month at 10.00 a.m.

See the calendar for details 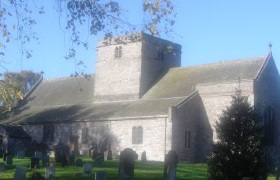