The parish of Martindale is a gem. It lies at the end of the narrow road that winds along the western shore of Ullswater, with fewer than 50 residents but many visitors who come for the walking and sailing. The ‘new’ church of St Peter, built in the 1880’s, stands at the top of Martindale Hause, where many park for the short walk up Hallin Fell, with its magnificent views of the lake. The church boasts some fine modern glass by Jane Gray who, under the inspiration of the then Vicar, Charles Barrand, filled the church with colour. The five windows on the south side, including a memorial to the officers and men of HMS Glorious, sunk off the Norwegian coast in 1940, also have symbols for Saints Nicholas, Peter, Martin, Ninian and Patrick.

The two windows on the west end illustrate the Benedicite whilst three on the north of the nave depict the Nativity, the Passion and the Resurrection. Three windows on the north of the chancel celebrate Queen Elizabeth II’s Silver Jubilee (1977) and one on the south of the chancel is a memorial to Charles himself, and celebrates St Cecilia, whose day is November 22nd, Charles’ birthday.

Services at St Peter’s are generally held on the first Sunday of each month from March to December and also the third Sunday’s from April to October, generally at 10.30 a.m.

Martindale ‘Old’ Church, dedicated to St Martin of Tours, lies another half mile up the valley. The site has an old yew tree that is about 1,300 years old. Whether that reflects the age of the site as a place of Christian worship is unknown, the first reference to a church being in 1220. This is a very simple building which, despite modern restoration, is essentially as it was in the 17th century. The visitors book reflects the place this church has in the lives of many people.

The present building dates from the 16th century and was restored in 1882 after the roof fell in. St Martin’s is used occasionally during the summer months for Evensong and also for weddings.

Evensong at St Martin’s is on the last Sunday of each month from May to September, usually at 5.30 p.m. 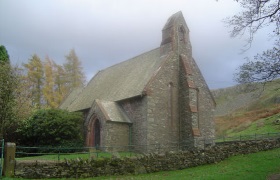 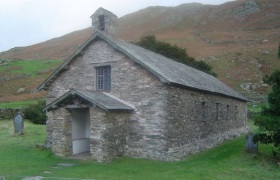